Known as the busiest and most successful Orchestra in the UK, the Royal Philharmonic Orchestra (RPO) was formed in 1946 by flamboyant maestro Sir Thomas Beecham and has enjoyed more than sixty-five years of success, giving first-class performances of a wide range of musical repertoire all over the world with artists of the highest calibre. With a busy performance schedule, it is vital for the orchestra to have a first class communication system which is highly reliable and facilitates continuous communication.

In 2001 Palebeck, along with three other suppliers, approached the RPO with a quote for an upgrade to their existing Panasonic DBS system. As they had no previous knowledge of Palebeck Telecoms, the RPO were eager to take up references.

Being London’s leading Panasonic dealer they have an astounding track record and gladly supplied the RPO with references. After contacting Klesch & Co. who has been a Palebeck customer since May 1993, they had no doubts about Palebeck’s expertise and proven record in customer care. This positive recommendation, along with Palebeck’s excellent quotation using the Panasonic S-ICX, enabled them to beat the competition.

"Previously, we had a Panasonic DBS system,’ said Bettina Deuse, RPO’s Office Manager, "and we were very happy with that, but we found that we had got to the stage where we required the extra facilities offered by S-ICX. The features we mainly wanted were increased flexibility in the areas of ISDN compatibility, direct dialing and voicemail."

"When staff are out at concerts and recording sessions it is vital for them to be able to just dial in and pick up their messages quickly and simply and the S-ICX allows them to do just that."

As the RPO has expanded however, so has their need for constant communication, and in 2012 they approached Palebeck for an upgrade that would enable them to introduce IP handsets and work from remote locations at a later stage.  Glad to continue working with the RPO and develop the relationship, Karin, Sales Manager at Palebeck commented: "It was particularly nice for me to hear we had been selected to work with them on the upgrade as I sold the original system and worked with Bettina right from the start of the relationship in 2001. It was nice to be able to upgrade them to the latest in the Panasonic range which perfectly matches their requirements."

In order to meet these requirements Palebeck suggested the RPO install the Panasonic KX-NCP500 which could enable the use of both traditional telephones and IP handsets remotely. An IP infrastructure could have been created in the office however as the RPO was happy to retain their digital handsets there would have been limited benefits achieved as well as unnecessary cabling costs incurred.

This idea was well received by the RPO as it meant that they were able to retain their existing KX-TM50E, which is still a current model, as well as their wiring.

The KX-NCP500 system now installed is an exciting evolution in Panasonics Unified Communication portfolio, designed to optimise business processes and delivers a range of business features; integral voicemail, a full range of wired and wireless telephone devices and a PC application to make using your phone both easy and fast. As the system is powered by OneNet it is possible for telephony features to be transparently deployed across multiple networked sites and users, providing organisations with the ability to create virtual teams across multiple networked sites and share resources more efficiently through key enhancements in features such as call distribution, centralised voicemail, multi-party conferencing and mobile integration.

In addition to these features the system is simple to set up, deploy, administer and maintain with high reliability assured by rigorous quality control and testing before leaving the factory.

The ability to connect the ISDN2E and separate analogue lines onto the system also gave the RPO reassurance that during any ISDN2E failures at the BT exchange, the analogue lines could then be used as back up.

“Having no previous knowledge of Palebeck Telecomms we were eager to take up references, which Palebeck happily supplied. After contacting Klesch & Co. who have been a Palebeck customer since May 1993, we were in no doubts about Palebeck"s expertise and proven record in customer care. Palebeck beat off competition from three other suppliers. They supplied a good quotation and certainly are very helpful and knowledgeable,” concluded Bettina.

Read this Case Study as it appears on Panasonic Business Systems 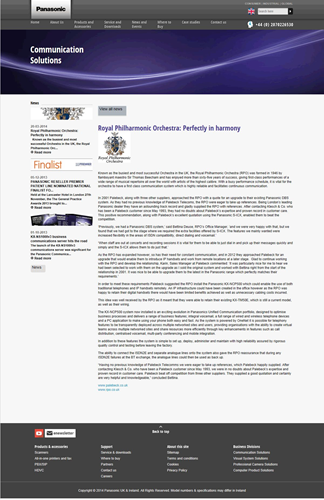 Read this Case Study as it appears on Panasonic Business Systems